In Memoriam
Georgi Raychev (Zmeya) was born on June 27, 1953 in Chepelare, to the family of the father of the cave and the speleology in the Rhodopes, the unforgettable Dimitar Raychev. Led by example, and naturally, little Georgi was involved in the adventure of “caving” not yet 10 years old. May 12, 1963 is the date of his “battle” baptism. On that day, he was literally persuaded by his father and his cheerleaders to descend into the 21-meter-wide precipice of the Karakuskata dupka.
In the same year he participated in the study of the Cave near Chepelare and a great expedition to explore the caves in the Raduva mountain. After the last one, he says, “I think I’ve decided from that moment to go to caves and expeditions …” 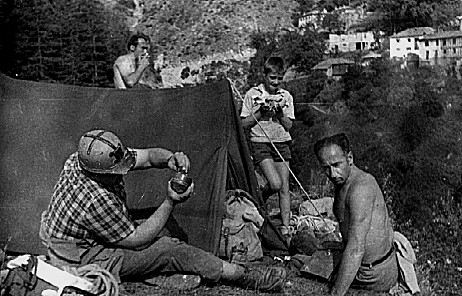 So it happens. In the years ahead, Georgi is involved in dozens of events of the officially functioning cave club “Studenets”, Chepelare and of the Bulgarian cave federation (BCF). He matures as a caveman during the cave studies at the end of Yagodina, Trigrad, in the upper valley of the Arda River. The family environment and its contact with karst and caves and the accumulated experience deepen his interest in cave studies and he enrolled the Sofia University “St. Kliment Ohridski” and graduated in 1978 with a degree in “Geomorphology and Cartography”. In 1983, the Chepelare club together with the BCF organized an international expedition in the area of ​​Dryanovo, Luki Municipality. In the same year, again under the direction and personal participation of Georgi Raychev began the modern mapping of Yagodinska Cave. It was completed in 1990 with a length of 8501 meters. In the same year, together with the Orpheus clubs – Devin and Silivriak – Trigrad, Chepelarers organized an expedition on the Kutugag Plateau in Turkmenistan. Under the guidance of Georgi Raychev there are infiltrations in the caves Kap Kutan (38 km) and Promenodokchia (17,8 km); Gusherin and Hashima Oyug (8 km). Meanwhile, in the period 1980-1990, together with his father Georgi organized a number of expeditions with various research purposes – paleontological expeditions in the Borikovsk and Triangle caves, exploration of the Paleolithic deposits in the Western Rhodopes / Borino village area, expeditions on the study of the caves sediments and elucidation of the paleogeographic features in the formation of karst complexes, hydrochemical studies together with the Polish Professor Marian Pulina, bio-speleological study together with Dr. Zhanez, Jubertti from Frances her and so on.
Since 1986, the Dragon adopts his father’s “general stick”, being elected chairman of the Chepelare cave club. In the next period, the club has become more active in its time in various directions and dimensions. By joining the national expedition in 1993, our friend was involved in exploring the karst and caves of Albania. In 2005 he participated in a second expedition in the Albanian Alps, this time in an expedition of the cave club “Heliktitt” -Sofia. Between 2006 and 2010 he participated actively in the Bulgarian speleological and ethnological expeditions in the area of ​​Golo Brdo in Albania, indirectly contributing to the recognition of a Bulgarian minority in Albania.
Along with his research and organizational work, Georgi has increased his training by acquiring various qualifications – cave rescuer, mountain rescue, cave instructor. He passes his knowledge to the younger as a lecturer and instructor in a number of national courses for the training of trainee instructors, instructors, technical improvement and mapping of caves. In the period 1989-1996 Zhoro realized part of his speleological competences as a member of the Managing Board of the Bulgarian Federation of Speleology. However, in 2015, due to disagreement with the policy conducted by this federation, he was one of the organizers and founders of the Bulgarian Cave Society.
One should not forget the contribution of Georgi for the development of the Balkan Speleological Union. Together with the already deceased K. Hadzhiyski and S. Genchev, he embraced the idea of ​​organizing Balkan caves and became one of the main organizers of the first one in 2007. Next, he did not fail to participate in the next 9 Balkan groups, which often times were announced by his Rhodopean caba bagpipe.
He has his professional qualities as a curator of the Museum of Speleology and the Rhodope Karst and later as director. Along with this, it has its undisputed share in the organization of the prosperity of the three Rhodope caves Devil’s Throat, Yagodinska, but above all Uhlovitsa (Ululitsa), by preparing her marcheshooter’s photo and the project for its development. Part of the results of his research find a place in publications such as: “Microclimatic peculiarities of the Yagodinska cave system”, series of Bulgarian Speleology, vol. 3, 1991, “Morphology and Genesis of the Yagodinska Cave System (Imamova Dupka)” (1991), “Kladeto” Slide – Rudozem. – Bulgarian Speleology, 2: 33-37, “Geomorphological Development of the Triangle Cave”, “No Climatic Phenomena of the Yagodinska Cave”, “Distribution and Subdivision of the Underground Carst of the Rhodopes”, “Some Observations on the Glacial Forms and the Karst Complex in the Massif” Veledjik “- Northern Albania”. Georgi Raychev did much to enrich the national speleological writing wealth. Together with A. Zhalov he initiated the publishing of the collection “Bulgarian Speleology” and edited his 3 books in the period 1989-1991. At the same time, under the aegis of the Museum, the work of Iv.Stoilova – “Bibliographic Directory of Publications on Speleology in the Periodical Printing 1980-1986 “. Together with his father, he was a compiler and editor of the collection “50 years of cave work in Chepelare (1950-2000)”. Thanks to this tandem, in 1983 the publishing house “Medicine and Physical Education” published the booklet from the series “Small Tourist Library” “The Strawberry Karst Area”. Later, Georgi became co – author of two new books on the native end of the Karst wealth of the village of Yagodina and the Trigrad Gorge and the Devil ‘s Throat Cave. Book – Atlas “The Karst Richness of Smolyan Municipality” (in two versions in Bulgarian and English), 2007, Smolyan, 44 pp.
Georgi Raychev had a extroverted personality and had diverse interests outside the realm of Speleology – local studies, ethnology, photography, Collectibles, marked propensity to travel, music. He had a wayward character with a wide range of events – from kindness and goodwill to the good, to intolerance and strong criticism to “dushmanite” him, and people who are not in his yard. His path was not quite equal, but it made sense because he left behind a deep trace.
With his untimely demise Bulgarian Speleology indirectly caving in Rhodopes, and his countless friends, not only at home but also abroad, they lost a dedicated fellow worker and good friend. It is sad – there is no one to play the bagpipes to comfort us and excite us, but we can hardly remember it. Goodbye, you will always be in our hearts.
Rest in peace.