Speleological exploration of the Akovan mountain

In 2016 Bulgarian Caving Society obtain 1 – year license from the Ministry of Environment and Spatial Planning of Republic of Kosovo for carrying out of speleological studies under the supervision and coordination of the Kosovo Institute for Nature Conservation (KINP). The Institute propose 3 different areas of exploration. The first one of them is the mountain of Zatriq village.

To explore the caves pointed from the Institute for Kosovo Institute for Nature Conservation (KINP) in the vicinity of Zatriq village and on the territory Akovan, Rahovec Municipality, Republic of Kosovo

Objectives
To explore and survey all caves and to study them from zoological point of view.

1. To assist the Kosovo Institute for Nature Conservation (KINP), by exploring the caves in Kosovo

2. To start the cooperation between Bulgarian Caving Society and Kosovo Institute for Nature Conservation (KINP)b in the field of speleology.

The municipality of Rahovec/Orahovac is located in south-western Kosovo. It covers an area of

The rocks in the observed area are represented by massive sandy limestones with rudists at Santonian-Maastrichtian age and rudist limestones at Maastrichtian age. These limestones build a NNW-SSE elongated plate, located between two ophiolitic sequences which belong to the “Rahovec Jurassic Ophiolite Complex” obducted to WSW during the Cretaceous crustal accretion in the area. The downward inclination of the limestone rocks is between 30 and 50 degrees in NE.

The limestone are reactive rocks tending to absorb mineral-rich heated brines, and metals in some favourable horizons. The ultrabasic serpentinised rocks that make up the ophiolite fragments host chrome, which break down under tropical to sub-tropical weathering over time to produce accumulations of bauxite. These bauxite deposits are hosted in the limestone karst and represent the remnants of weathered ultrabasics.

The expedition members from Bulgaria travel by car of K.Danailov Pristina via Skopje and get back to Bulgaria through Serbia. The travel in Kosovo was realised by the same car. The travel with car in Kosovo requires travel insurance 15 Euros for two weeks which one could obtain in the check border point.

The Bulgarian cavers were accommodated in the Hostel in Malishevo Town. During the expedition members ate at some local restaurants.

Whenever possible, entrance locations were recorded by means of GPS (Global Positioning System). Readings were recorded as UTM grid coordinates, using the WGS84 datum parameters. The UTM zone is 34T. Photographs were taken of all cave features and entrances to aid future location .

All surveying data were computed and fully or partially processed on spot with Autocad. The cave surveys in PDF format are available at or can be requested from Bulgarian Caving Society

of the Speleological Expedition

Travel of the Bulgarian team from Sofia (Bulgaria) via Skopje to Pristina. Departure in Pristina. Meeting with the representatives of Kosovo Institute for Nature Conservation Fadil Bajraktari, Sami & Vadhet Pruti – discussions. Transfer to a hostel!

Travel to Zatriq village. Preparation for caving. Trekking to the Shpella I Pesterit with the exploration and surveying of the cave. The team divide in two groups – K. Danailov , A.Zhalov supported of Sami Behrami to survey the cave and Vanyo Gyorev, Heliana Dundarova and Fadil Bajraktari went to explore and survey the cave Shpella e Bali Agës. The explorers of Shpella e Pesterit found a shell in the cave and later inform the police about this. Both cave have been surveyed and the Bulgarian team went to Malishevo town where accommodate in little hotel.

Travel to Zatriq and took a guide from the village to show us non explored vertical cave. After 1 hour of trekking reach to the place where the cave could be and start to search it without success. Sami Behrami break away from the group and start to search the cave. Finally they found another cave – the well-known vertical cave Shpella e Plumbave (Pigeons’Cave). A.Zhalov rig the cave and K.Danailov & H.Dundarova drop so to explore and survey it. The guide was fired with ambition to find the first vertical so he continued to search it and after one more hour find it. The name of the cave Shpella e Mbretëreshës se Bardhë (White Queen’s Cave). A.Zhalov rig the cave . K.Danailov start the surveying and H.Dundarova drop to the cave to made zoological observation.

12 April 2017.Travelling to Zatriq for the exploration and mapping of Shpella e Banuar (Gërgavica) . The team divided. A.Zhalov start the cave mapping form the entrance to the narrow place and other (K.Danailov, V.Gyorev, H.Dundarova the passages behind . After the exploration the team, supported form Sami Behrami moved to village Dush- Klina to visit the Shpella I Dushit and to made zoological observation in it.

Travelling to Pristina. Meeting with Fadil Bajraktari and Sami Behrami and discussion under the next steps of cooperation. We agreed that the next studies will be in the Pastrik Mt. close to Kosovo – Albanian border. Travel to Sofia via check point Bojanovci – Vladicin Han – Strezimirovci

The cave is located at 1 410 m (in strait line) NE from Zatrich vill.  in  the foot of W slope of  Akovan Mt. The entrance is situated at 794 m.a.s.l .  and is oriented at West.  The cave is ponor  (sinkhole) and collect the water coming from  two  gullies. The amount of inflow varied and depends of the season and climatic conditions. The catchment area is about 1.2 square km. The cave is  formed in Cretaceous  ( Maastrichtian) limestone  and developed  along  a fissure  with direction E-NE.  The entrance has a form of semi ellipse with dimensions 10.30 in width and 5.76 in height. The firs cave passage is low grade and terraced gallery leading to a little pit – 3.80 m. The bottom of this passage is covered by boulders. One part of the water coming from inside passed below the boulders and jumped in the pit. Next part of the stream passed through the   by- pass in the right side of the entrance gallery. The bottom of the pit is reachable trough the by – pass. The bottom has dimensions about 5.70 х 6.60 m. and also a little like in its western end. The eastern part of the room ended on the edge of the second pit – 3. 70 m. From the bottom starts the last cave passage – length 13.40 m average width 4 m and max height     3.40 m.  The cave ended with two narrowing totally stuffed by trees, grass, ground and rubbish. The water sinks in the sediment. Many tree leaves and straws are fixed to the walls of the hall. They mark the level at which water rises after flooding. Perhaps the passages after the crowdedness’s in the end   are rather narrow and cannot omit large amounts of water. From this point of view, the prospects for the continuation of the cave are not very large. The cave was explored and mapped at  10- th April 2017 during Bulgarian – Kosovo expedition .
Surveying team:  ing. Kiril Danailov and Alexey Zhalov.

The cave is located at 1 100 m (in strait line) NE from Zatrich vill.  in the upper part of E slope of  Akovan Mt. The entrance is situated at 929 m.a.s.l .  and represents fissure with length 8.82 m and average width 1.20 m. oriented at direction NW-SE. The depth of the pit in SE part of the entrance is 11.20 m. The gallery which start form the bottom is low grade (inclination 43 deg.) and  is 22 m long . The width of the passage varied from 1.60 to 2.80 m. The height is around 6 m.  The bottom is covered by gravels, boulders and clay. The cave was explored and mapped at  11- th April 2017 during Bulgarian – Kosovo expedition .
Surveying team:  ing. Kiril Danailov and H.Dundarova.

The cave is located at 1 480  m (in strait line) SE from Zatrich vill  at 848  m.a.s.l  and in the S slope of  Akovan Mt.  The cave is horizontal  . The entrance is triangle with dimension width 3.25 m and  5.45 height   and is  oriented to south. The first passage of the cave is  developed to SW . Its’ length   is 22.90 m. The average width and height is about 3.50 m , respectively 2 m but the maximal height  reach about 6 m. The bottom of this part of the cave is covered by soil and gravels. In the end of the passage 1.10 up from the floor there is narrowing (length 0.70 m).  The passage behind is about 14 m long. Its width is about 4 m. The average height is 3 m. In the end of the  passage the cave turns in SE  but after take the same direction as before – the gallery is 32 m long. The width of the passage varied from 1.70 to 3 m – the height is about 2.5 m . The cave ended with a little hall  with dimensions 10 x 30 m and height 6.5 m . There is big pile of guano in the middle of the hall.
The cave was object of archaeological excavation. There are two excavations in the entrance part of the cave. Fragments of potteries have been found.  The artefacts were determinate (date) from Chalcolithic (Eneolithic)  to Early Bronze age. The cave was explored and mapped at  12- th April 2017 during Bulgarian – Kosovo expedition. 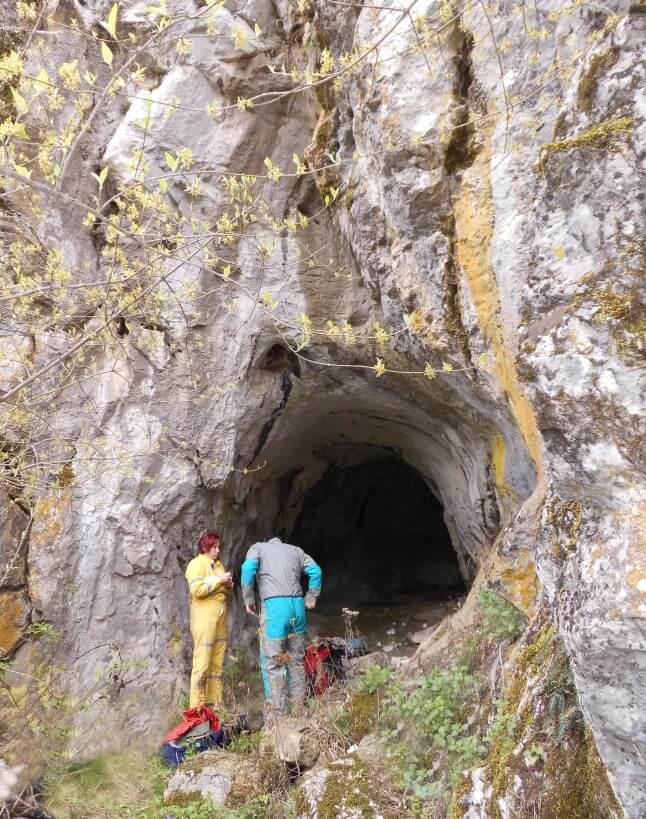 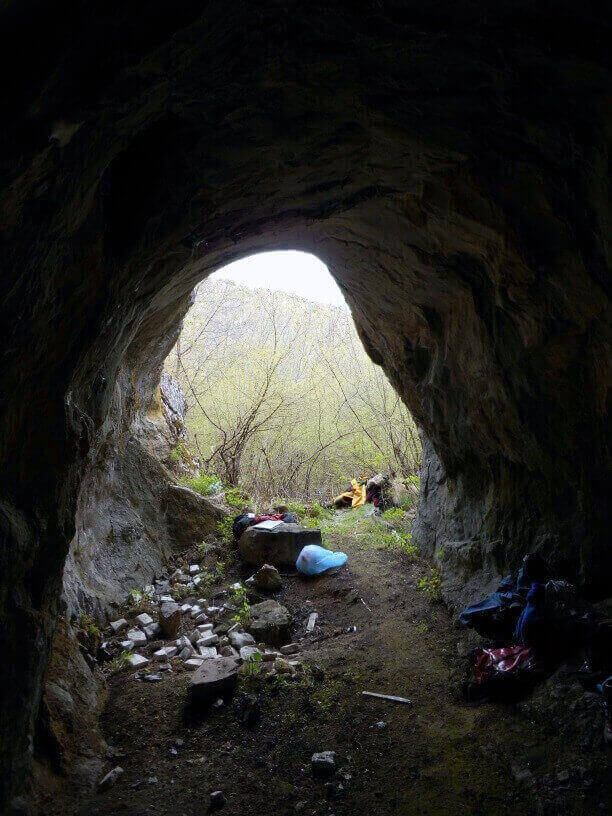 The cave is located at 920  m (in strait line) NE from Zatrich vill  at 910 m.a.s.l  and in the W slope of  Akovan Mt.  It  is  low-grade and is developed at SW direction. The entrance t has semi- elliptic  form  with dimension width 0.84  x 1.70 m and is  oriented to NW.  The main gallery is 20 long and has inclination about 29 degrees. Its average width is 2 with height varied from 1.60 to 2.30 m. On the left (NW) side  the  gallery has two appendices the second one ended with a oval room with dimensions 2.90 x 3.35 m. The bottom of the passage is covered with gravels. The main gallery takes right branch at  9.90 m far from the entrance. This passage developed parallel of the main one and is 8 m long. There are two steps of about 2.5 m deep . Both parts of the cave joint together on their ends. The cave was explored and mapped at  11- th April 2017 during Bulgarian – Kosovo expedition .
Surveying:  Vanyo Gyorev , H.Dundarova.